The latest product of SanDisk in the line of long-lasting external SSDs is the SanDisk Extreme Portable SSD V2. The external SSD is swift in working in comparison with its predecessor the SanDisk Extreme Portable. To make sure the drive works at its best, users need not replace or upgrade their computer or laptop. The Extreme V2 is robust and comes with password protection and 256-bit AES hardware-based security. An added advantage that users might take as a good reason is a five-year warranty offered by the company.

The Extreme V2 comes with a carabiner loop through which the drive could be carried around on the belt or a backpack. The Extreme V2 is an amazing companion for people who travel frequently and need to save or retrieve huge files at a moment’s notice. So, let’s take a peek at the features it has to offer.

The design of the SanDisk Extreme Portable SSD V2 is not as tiny as some of its rivals but is small enough to fit into a back pocket with relative comfort at 8.85mm. The modest size of 50 x 96.2 mm is a reason why it is significantly smaller than any of its contemporary smartphones. The SanDisk Extreme drive has been focused on an audience that enjoys being outdoors, as it comes with a rubber body and an orange plastic hook at the top right that can be secured to a bag or backpack. The body of the device has been constructed to be remarkably shock resistant, capable of withstanding a drop from a height of 2m on a concrete floor and surviving without any severe damage.

The drive has been given an IP55 certification in terms of water and dust resistance. This sort of design ensures the USB-C connector is kept clear of any kind of dirt. The upside of such a design case is to keep the port clean and safe from any sort of damage that can prevent it from being connected to any device. The device needs to be dried out thoroughly before using it if there is a case of the device falling underwater. Despite all these features, the device comes with a five-year warranty that is backed by the company. 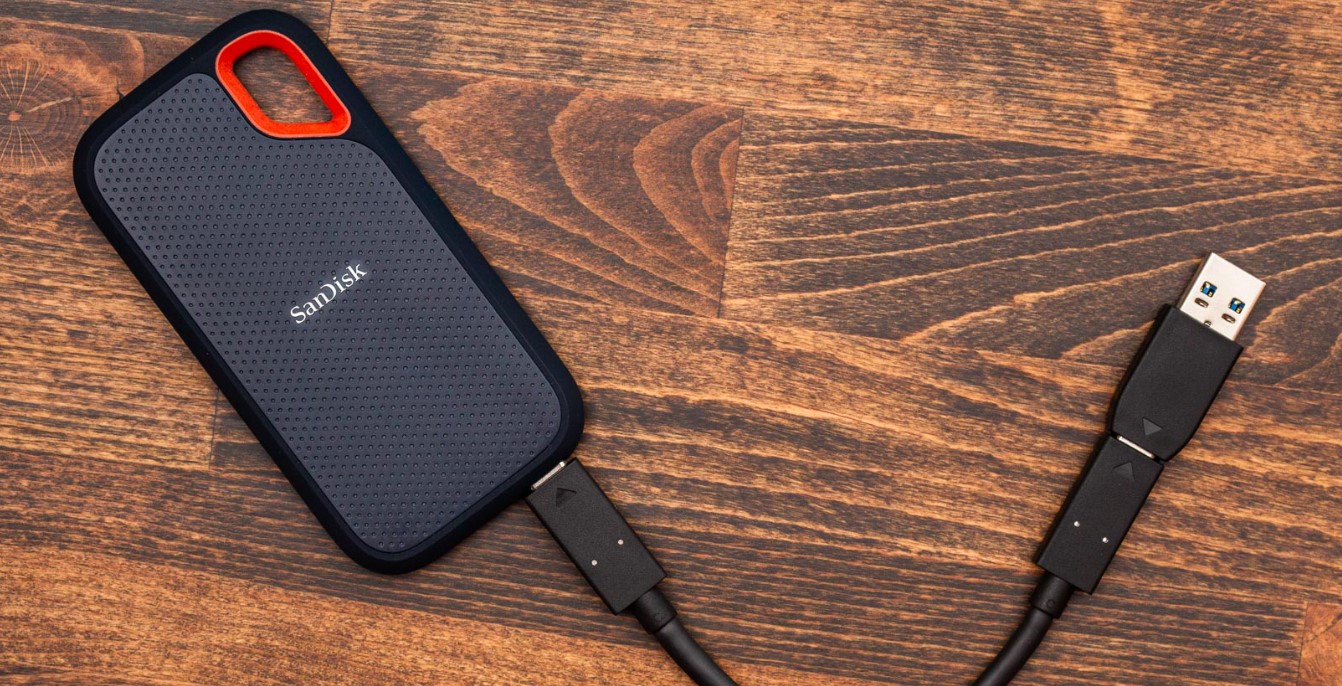 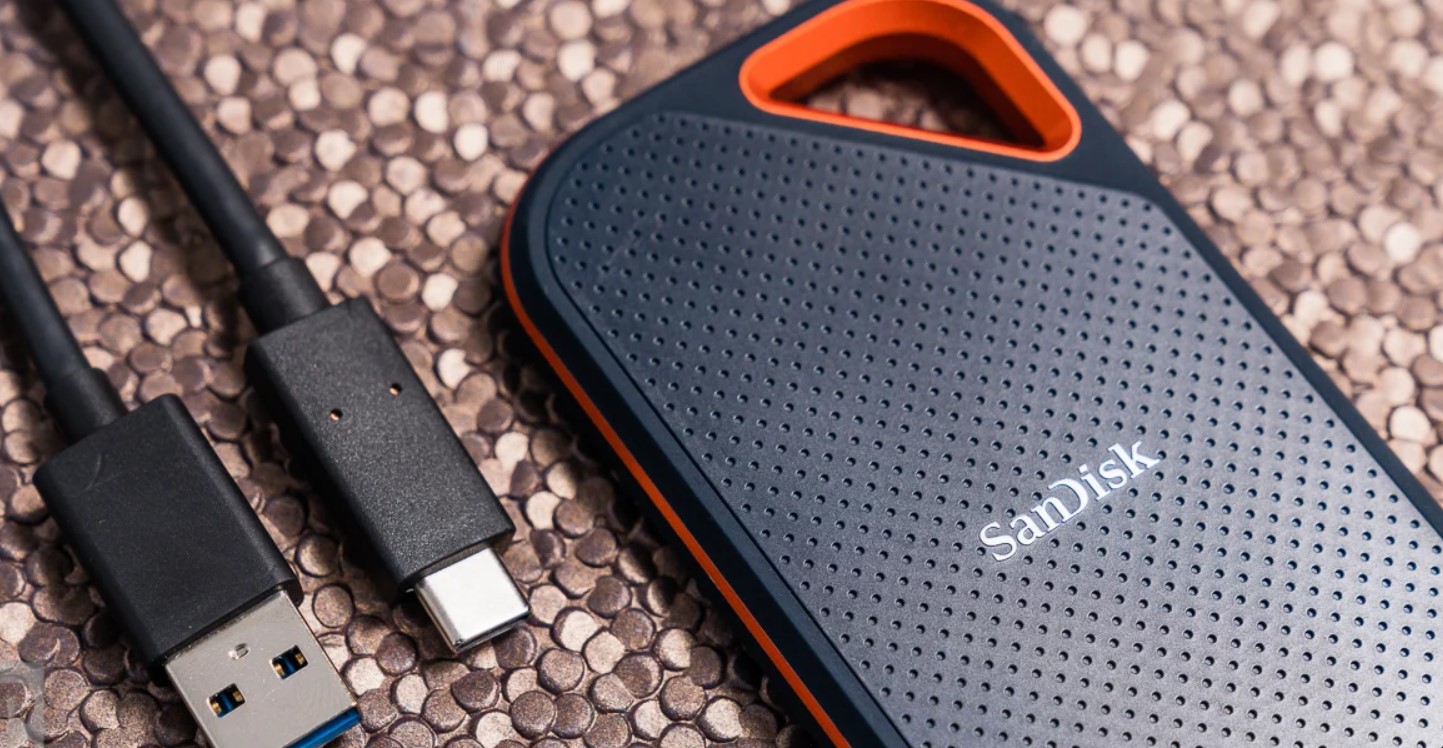 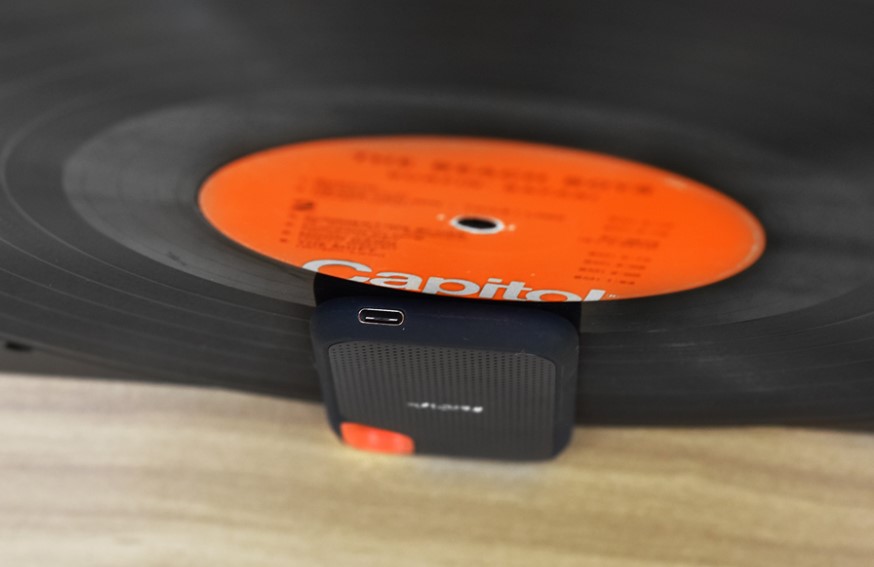 The SanDisk Extreme Portable SSD has been built with a single connector that is a USB 3.1-Gen 2 port, which is advantageous when used with the accompanying Type-C to Type-C cable, allowing it to reach up to 550MBps as per the maker – a fraction faster than when used with the bundled Type-A adapter. Something for the company to keep in mind for the future edition of the drive. Certain numbers have been noticed here, with the proviso that the Type-C connection was utilized rather than the Type-A connector.

The SanDisk Extreme Portable SSD V2 has surpassed a lot of tests, including non-Thunderbolt 3 drives with Crystal Disk Mark. The result was the drive gave a reading of over 560Mbps. The disk demonstrated the capability of transferring a 100GB file in 294 seconds. This corresponds to a transfer rate of nearly 334MBps.

Due to the hardware’s intrinsic restrictions, the device does not achieve its rated transfer rate of 10GBps. The Extreme Portable SSD is pre-programmed as an exFAT device, enabling it to work on both Windows and Mac right out of the box. Users receive a copy of SanDisk’s Secure Access 3.02 software, which lets them establish a password-protected folder to secure all the important files with 128-bit AES encryption.

The ADATA SE730H is another rival that merits more attention. It is tinier than the SanDisk Extreme Portable, and has an IP68 rating, making it significantly more durable. It features a Type-C connector, a three-year guarantee, and uses 3D NAND Flash technology, just like the Extreme, although it is significantly slower and from a lesser-known company.

Though popular brands like Seagate, Glyph, WD, Lexar, and G-Technology all have similar durable and large storage external SSDs, none of these have a distinguishing feature that would set them apart from the T5, SE730H, or SanDisk. When paired through a USB-C connection, the device outperforms its competition in terms of performance. The design and build size are perfect, and while there is a general complaint about the cable, users can’t go wrong choosing the SanDisk Extreme Portable V2 SSD.

Amazfit Pop 2 Launch – What to Expect

ScopeJumbo is an Indian All In One price comparison, product review and guide platform. We hand picked every product in the market and highlight its pros and cos.

From Company
From Social